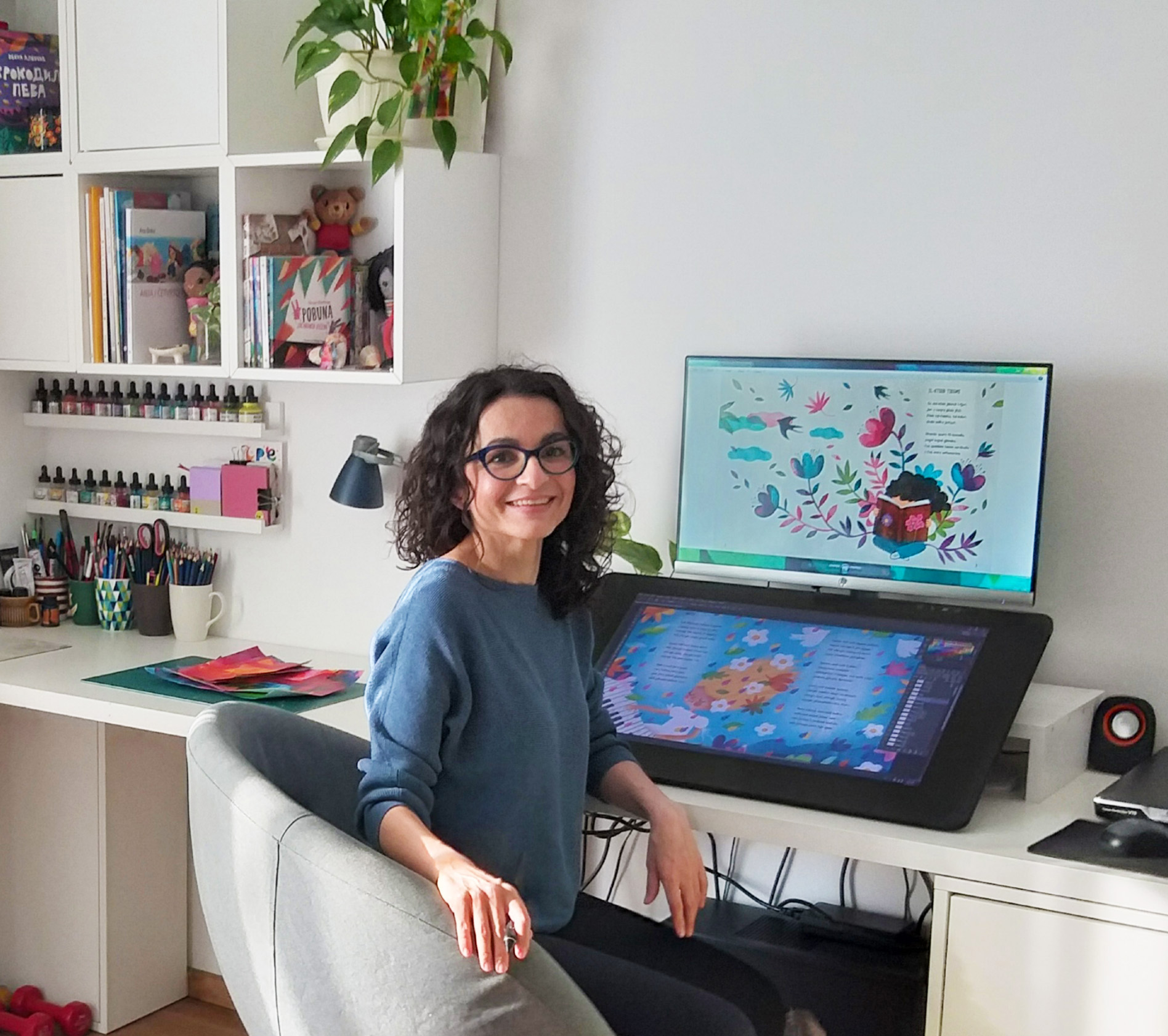 Maja Veselinović lives in Belgrade (Serbia) where she graduated from the Faculty of Design (Graphic Design major). She also has a degree in art teaching from the College of Fine and Applied Arts. Collaborating with numerous publishers, children’s festivals, cultural institutions, creative agencies in Serbia and abroad, Maja illustrates books, magazines, posters, textbooks and educational publications intended for children. Her comics and illustrations were featured in many comics anthologies, and specialized art and design publications.

She is also engaged in the field of art education for preschool and school age children through workshops and similar creative activities.
So far, Maja won several domestic and international awards, and had fourteen solo and more than seventy group exhibitions. She is a member of ULUPUDS – The Association of Serbian Applied Artists and Designers with the status of an independent artist.

Maja’s works are inspired by memories of childhood and growing up, the atmosphere of carefreeness of those days, by old picture books and toys, by nature in all its forms… but mostly by the beautiful things that are here and now – family, friends, everyday worries and joys.

Award at the Annual Exhibition of the ULUPUDS Painting and Graphics Section, for work / Portrait of a Year / a series of 12 typographic illustrations for the calendar, Gallery at Princess Ljubica Residence, Belgrade, November 2021.

15. International Biennial of Illustrations – GOLDEN FEATHER OF BELGRADE –  special award at Golden Pen of Belgrade for a series of illustrations for the book of stories ANJA AND THE FOURTH PIG (author Ana Đokić, publisher Kreativna Mreža, Zagreb), November, 2019.

NEVEN – Award for the best illustrated book for children, for illustrations of the poetry collection ULJEZI (author Dragana Mladenović, publisher Fabrika knjiga, 2016) The award was established and awarded by the organization Friends of Children of Serbia, Belgrade, October 2017.

THE WHITE RAVENS – for the book Crocodile Sings, by Vesna Aleksić, published by the Kreativni centar, Belgrade, October, 2018.

HORIZONS – Award at the Annual Exhibition of the Painting and Graphics Section of ULUPUDS, for illustrations from the series IN THE CAT’S GARDEN, Progres Gallery, Belgrade, November, 2017.

Annual exhibition of the painting and graphic section of ULUPUDS – one of the three equal awards for illustration, Happy Gallery, SKC Belgrade, October 2014.

Print magazine, The Art of European Design, featured as one of 12 most interesting European illustrators, June 2008.